Not ready to tread the boards yet but like to be involved?

No problem, there are lots of other roles imperative to the success of each production.

Director
The Director begins with a character synopsis and line count in preparation for auditions from which the cast is selected and a rehearsal schedule created. Other responsibilites include set design approval, liaising with the producer, music selection and arranging musical director and choreographer if required.

Producer
Every production requires a producer who will typically co-ordinate publicity such as posters, programmes, tickets, reviews etc., as well as liaise with Director & production team and control the budget.

Stage Manager
The Stage Manager’s role is primarily to attend all rehearsals in order to assist the director and cast in ensuring correct positioning on stage, organise the backstage team, liaise with sound and co-ordinate the performance.

Set Designer
The Set Designer not only creates the design, but also liaises closely with the Director and the production team. They will create a work schedule, arrange for materials (buy or hire) and dress the set in terms of furniture, fixtures and fittings.

Wardrobe/Costumes
Generally the wardrobe person will email group members to source costumes before either making, hiring or buying. Also need to be able to assist with costume changes, undertake running repairs and organise the collection and return of all articles at the end of each production.

Props
As with costumes, the first port of call to source props is to contact group members who may be able to lend or make items. Otherwise, hire or purchase of items needs to be organised. Props need to know the play, attend rehearsals, assist the cast and liaise with the stage manager as well as organising the return of all items at the end of each production.

Make Up
Aside from an obvious creative flair, the make up team check and replenish stock for each production, clean all brushes and sponges and generally assist the cast.

Technical
A range of opportunities within the Sound, Light and Special Effects team.

Prompt
Prompt will do….. just that! Provide feedback to cast members as well as liaise with the stage manager and obviously needs to attend all rehearsal.

Box Office
A Mailshot is sent out approximately 6 weeks before a production.  Seats are allocated and tickets are sent out on receipt of payment.

Front of House
The team puts out seats ahead of each performance. Every production has an interval and the front of house team mans the audience tea and coffee bar and provides a well earned cuppa for the cast as well as organising the interval raffle.

Why not come along to our 8:15pm Thursday meetings?
The production team jobs are filled by members of the drama group and anyone can volunteer.

Click here to listen to Eagle Radio 940 podcast for more details of the group. 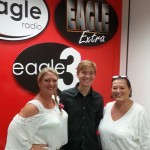